I keep labeling these entries weeks, but they are actually sessions. Occasionally, some sort of schedule conflict comes up and my vision therapist or I will have to cancel an appointment. But I still like to call them weeks. Sessions makes it sound like vision therapy only happens in the office. Like it's some sort of electroshock therapy or laser hair removal. That's not true. The real magic happens at home when you're doing your homework. That's when you discover lots of interesting and strange things about your visual system. You go to vision therapy and get instructions and get inspired, and then you go home and do the hard work.

Speaking of homework... After my week 7 appointment, I had a 2-3 week long break between vision therapy appointments. First I had the flu and couldn't go to my appointment one week, and then my optometrist and vision therapist went to a VT conference the next week. With all that time between appointments, I fell off the wagon in terms of homework. Graduate school and my ESL teaching job started up at the same time, and I just decided forget my eyeball homework altogether. I'll do it tomorrow, I thought. And then later I thought Well I haven't done it all week, so why start now?

When I did finally have my next appointment, I admitted to the vision therapist that I had been bad. I'm BAD, I told her. I have to get up at 6 am now and I don't know what to do with my life, and I don't know how to manage my time and I'm sorry I didn't do my homework every day. I'll start doing my homework again, I promise.

She believed me and didn't try to make me feel guilty, and I have been very good ever since.

Anyway, because it was week 8, I had an evaluation by the optometrist. He had me look through the phoropter, and put all sorts of weird prisms in front of my eyes. He said things like "Do you see one or two?", "Tell me when they are over top of each other", and "Tell me when they break apart into two." Or something like that. We did this for a while, and then he said that I had good control over my eyes, and a wide range of... something, and that I was doing very well.

My vision therapist has also been saying that she thinks I am "flat fusing." I can point my eyes at the same place, I can put on the red green glasses and see all the playing cards on the table, but I haven't had any sense of depth yet.

Divergence is still quite hard for me, too. Divergence is the opposite of crossing your eyes. It happens when your eyes look at something in the distance and the line of sight from each eye is almost parallel. Take a look at these illustrations I found of someone watching a 3d television. 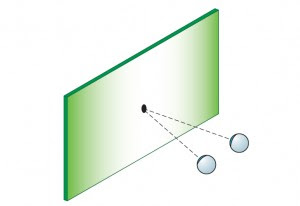 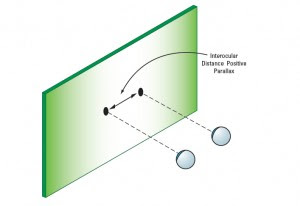 (I don't know what "interocular distance parallax" means, so just ignore it.) In the first picture, they are converging their eyes on the TV screen. In the second picture, they have diverged their eyes to look "through" the TV, or at some point theoretically behind the TV. I can converge my eyes easily, and the closer the object is the better. I also am quite familiar with how convergence *feels*. But when I try to diverge my eyes like that, I don't know what I'm doing, I lose control, go strabismic, and start only using one eye. I don't know what divergence *feels* like yet.

I'm getting a little better at it, though. One thing that helps is to blink my eyes a thousand times a second. That helps break the suppression and helps my eyes relax and diverge a little.

Speaking of suppression, I still have a fair amount of that, too. I can see and fuse/not suppress big discrete things like playing cards on a table. But if it's something smaller, like little playing cards on a computer screen, laying over top of each other in a column, like in a game of Klondike solitaire... wow that's hard.

That's slowly getting better, too, I think. One of the exercises that I've been doing for the past two weeks is to wear red/green glasses and track this ball as it swings back and forth: 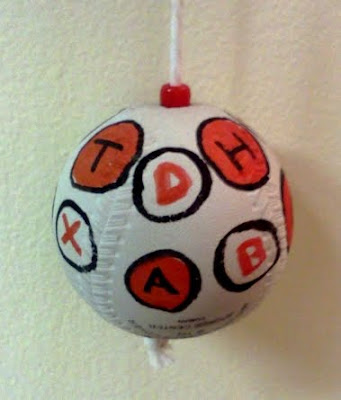 I made it myself. It's sort of a red/green Marsden ball. The first ball I made had a more random design, with lines and circles and squiggles all over it, but I found it hard to use. It was hard for me to "lock on ' to it.

I thought that using letters might be easier. My brain likes letters. If it sees letters, it's says to my visual system "Hey! Pay attention! What is that? Read that." It also allows me to say the letters out loud as I am tracking them, like some sort of incantation that will keep the letters "turned on."

I've also been playing around with a stereoscope. You can see a picture of one here.

You put special cards in it and look through the eye pieces. I can pretty much do all of the flat fusion exercises, like this turning these two soccer balls into one soccer ball with all the numbers: 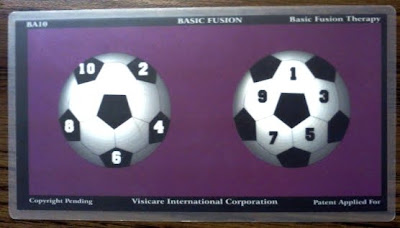 When I look at the cards that are supposed to produce depth, nothing really happens. I fuse the images together into something flat.

The only exception is this slide of a chair. 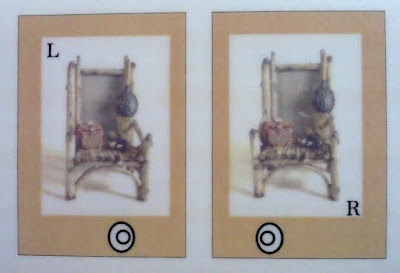 When I look at it, it's not that I see depth exactly. It just looks weird and sort of *realer*, like I could be looking through a window. I had my normal-eyed friend look at it, and he said that the back of the chair looks really far away, which I still don't see. But something's certainly happening with that chair... It pokes at my brain in a funny way.

One last note - I've updated the comments system on this blog. I hope that it's easier to use now!
Posted by Josh at 12:51 PM