Thoughts on esotropia (and scotomas)

Sometimes, I lay awake at night, thinking of esotropia and how mysterious it is. I've read and heard over and over that exotropia is easier to treat than esotropia. Good thing I'm exotropic, I think to myself. But then I remember that I used to be very esotropic. I was a cross eyed baby! I had congenital/infantile esotropia. That's how this whole strabismus mess started.

I developed exotropia after my first surgery, and then a second and third surgery couldn't get rid of it. Is it really true that, because my strabismus surgeries accidentally made me exotropic, I now have a better prognosis than my esotrope friends? Even though my original condition was esotropia? That seems weird to me. Or lucky. Or something.

Perhaps it's all a mystery, and nobody knows... 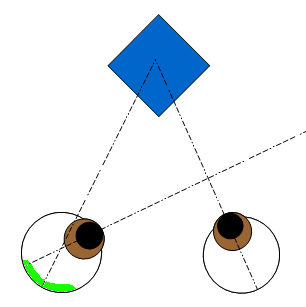 Both eyes are able to see the diamond, one centrally and one peripherally, and double vision should result because the eyes are not aligned. However, only one diamond is seen, because the peripheral diamond image is falling on a suppression scotoma. 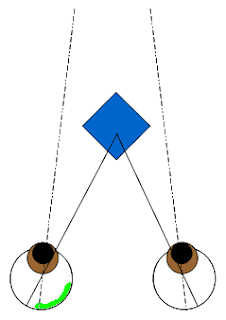 If both eyes overdiverge and fixate on a point behind the diamond, that would make the diamond image fall outside of the suppression scotoma (and the image would double). However, this is easier said that done. I have trouble diverging my eyes at will, and I can imagine that an esotrope would have the same difficulty. After all, if they could diverge their eyes like that, they wouldn't be cross eyed! So it's possible that this may not happen as often.

It does explain something interesting, though. I am an exotrope, and I have trouble with physiological diplopia in front of the image I am fixating on. This is the kind of diplopia that happens when you put a pencil in front of your face, and make it double while looking at your professor. And when looking at the Brock string, I tend see an upright Y. I have trouble making the strings double in front of the bead. In both cases, the problem is the same: difficulty doubling in front. 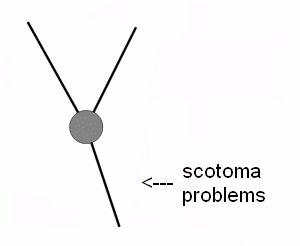 My blogger friend Lynda, an esotrope, has the opposite problem. She has more trouble causing objects behind the image to double. While looking at a Brock string, she sees an upside down Y. She has trouble making the strings double behind the bead - difficulty doubling behind. 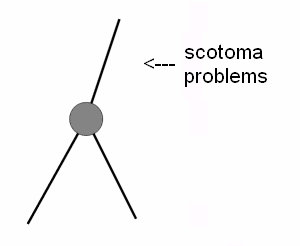 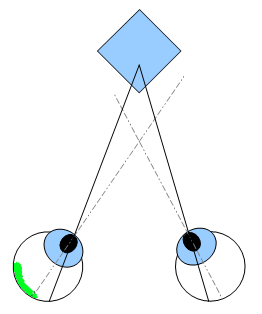 As an esotrope, Lynda would be the opposite. She probably has an easier time seeing diplopia by overdiverging, and thus seeing a double image in front of the object.

In conclusion, suppression scotomas explain everything in the world.
Posted by Josh at 6:55 PM