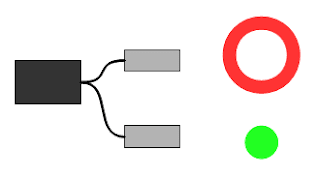 We also did some other stuff and I tried out some ideas for physical diplopia practice. And then the three of us started brainstorming and came up with a neat idea for an exercise we want to develop involving black, red, and green felt and Nerf guns (details to come later). It was really fun and inspiring experience all around! I'm more inspired to do my own homework now, and it even made me consider maybe going to optometry school some day. Vision therapy is just so fun!
Posted by Josh at 9:44 PM 6 comments