I developed strabismus, a misalignment of the eyes, at a very young age. My mother has always told me that I was "born cross-eyed." When I was little, my parents noticed that my eye (or eyes) turned in, a condition known as esotropia.

Why were my eyes doing that? The theory is that my eyes were slightly misaligned, for whatever reason, and that this caused double vision and visual confusion. To cope with this confusing world view, my brain needed to turn off the input from one eye. It turned one eye inward, thus making the input from that eye easier to ignore. With one eye suppressed, I could have a single, stable picture of the world.

My parents were concerned about their cross-eyed baby, understandably, and I ended up having two eye surgeries to try to correct this misalignment. Initially it appeared to work, and I looked normal. However, as the years progressed, my eyes started wandering out in the opposite direction. One eye faced forward, while one eye looked off to the side, a condition known as exotropia.

This eye turn became more and more dramatic. My wandering eye was way out to the side, so much so that my classmates often thought that I was looking at them out of the corner of my eye, when I was really watching the teacher. I even remember one of my aunts telling me, "Josh, quit looking at me like a gargoyle."

It was around age 13 that my parents finally decided to sign me up for a third surgery. I was scared, but also excited at the prospect of finally looking "normal." I remember the day of the surgery quite well. This may be silly, but these were the three things that terrified me the most: the IV needle, being naked and barely covered by a hospital gown, and the post-anesthesia throw ups. The thought of KNIVES going into my EYES, or going BLIND, didn't really cross my mind. I'd had this surgery twice before and trusted the eye doctor. It was needles, nakedness, and throwing up that really scared me. In any case, the surgery seemed to go well. I did have to endure an IV and being naked in a hospital gown, but I did not throw up.

The eye surgeon wanted me to come to her office immediately after the surgery to tighten up the stitches, which I hear leads to a more precise alignment. On the way there, my parents stopped and got me some ginger ale to drink, which made me happy. I love ginger ale. Anyway, when I got to the office, I sat down in the exam chair and my parents sat a few feet away from me, under a Snellen chart. The eye doctor proceeded to put some numbing drops in my eyes, and then started tugging at the stitches in the corner of my right eye, trying to tighten them. Tug tug tug...

Suddenly, there was a pop, and my eye went sideways toward my nose. The room looked funny, but I felt an odd sense of relief, as if some strained muscle, somewhere inside of my body, had just relaxed. I also had a vague sense of "this is probably not good" but I was so groggy from the anesthesia that I really didn't know what to think.

However, the eye doctor looked panicked. The stitches from the surgery had just broken loose, and my eye had detached from one of it's muscles. 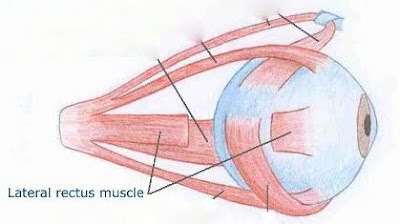 See how that lateral rectus muscle up there is cut in half? That's what happened!

In the midst of all this, I thought "hmmm... I'm thirsty" and tried to take another drink of my ginger ale. What else was there to do? However, one of the doctor's assistants nervously reached out and pulled it away from my mouth in a gesture that I took to mean, "Let's not fill your stomach up just yet. You may be having surgery again sooner than you think."

The doctor stepped out of the room and had a secret discussion with her assistants. When she returned, she explained to me and my parents that she had done over 900 eye surgeries, and that this had never happened to her before. She wasn't really sure what to do, but it boiled down to two options:

1. Immediately return to the hospital for another surgery on that eye.
2. Perform the surgery again immediately, in the office, while I was awake.

I chose option number 2 because, as I have told you, I was more scared of IVs and hospital gowns than... anything in the world, apparently.

So the eye doctor added more numbing drops to my eye, propped it open with some sort of gadget, pointed a blinding light at it, and began her work. She asked me to look over at the left wall and keep looking there.

I sat like that for two hours, staring at that wall. I remember blood dripping down my cheek and drying there, and I remember hallucinating from staring at the bright wall for so long. I didn't feel any pain at the point, or anything at all, really. My parents were quite traumatized however, from having to witness surprise eye surgery.

After the eye doctor finished, she sent me home with some sunglasses and a prescription for a whole bunch of icky eye medicines. She told me and my parents to call her if we needed too. As it turned out, we did need to call her. The whites of my eyes had turned a solid red color and I looked like a vampire. I felt like a vampire, too, and even the smallest amount of light caused me excruciating pain. After I had turned off all the lights in the house, unplugged the Christmas tree, and stuffed pillows under my door, my parents called the eye doctor, who called in some pain medicine for me.

After the surgery, I had strong double vision for a few weeks, followed by periods of lingering double vision where people had two heads. My eye also began wandering outwards, backsliding into it's pre-surgery strabismic ways. The surgery had reduced the degree of my eye turn, but, alas, it was still there and still noticeable. If I wanted it straighter, I was told that I could try again with a fourth surgery in the future.
Posted by Josh at 8:50 PM