Before I go on further, I want to talk about suppression. It seems to me that it can come in all shapes and sizes. From reading about Stereo Sue (an esotrope) and some other vision therapy blogs by esotropes, it sounded like their suppressed eyes were really "turned off." You either see out of one eye or another. And before my third surgery, that's how I remember seeing too. My eye turn was really dramatic, with one eye wandering way over to the corner of my eye. I either saw out of my right eye or my left eye.

Since my third surgery, I seem to have developed a more panoramic view, with a central suppression zone. Here's an illustration that I found somewhere on the internet a while ago: 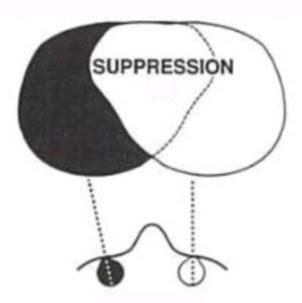 I get the input from the periphery of both eyes, but one eye needs to "take over" for the stuff in the middle. The other eye's input about the middle is suppressed, because it's overlapping and confusing.

It took me a few weeks in vision therapy to even realize this. I was so efficiently suppressed that I had no idea that it was happening. If you would have asked me earlier, I would have told you, no, I don't really have that suppression stuff. I thought that I had a panoramic view with the images from each eye being pasted next to each other. If I did have some suppression, I thought it was just a sliver in the middle. Now, I realized that it's quite a bit bigger than a sliver.
Posted by Josh at 10:28 AM