Well, I'm still no good with the cheiroscope. I have trouble fusing two images, even when both eyes are "turned on" or not suppressing. My brain keeps saying, "But there are two eyes!!! And two different things!!!" Seeing two different things and fusing them into one is an alien concept to me.

Also, I have been becoming more and more motion sick. If I drive for half an hour or longer, I get nauseous. My vision therapist says it's a good sign, though, so I've decided to be happy about it.

This week was a little special because I met with the optometrist to ask him if I had anomalous retinal correspondence (ARC). I won't try to explain what that is, because I have trouble understanding it myself. But it is something that complicates vision therapy and takes a long time to correct, if it can be.

The optometrist didn't think that I had it, because it's not very common. And after reading about it some more, I thought that I probably didn't have it either. However, he didn't really have the diagnostic tools to tell me either way, so we're just assuming I don't. The moral of the story is: don't get paranoid and self diagnose.

Later, I also tested myself for it, with this test involving a camera flash after image in both eyes, and I think I'm fine. But I digress...

This week was also special because it very snowy, the roads were terrible, and I spun out, 360 degrees, on the highway on the way to my vision therapy appointment appointment. Luckily I didn't hit anyone or fall off the highway and end up upside down.

Anyway, I learned some fun stuff this week. Here are some highlights:

Red/green stoplight
My vision therapist made the instrument for this activity out of a manila folder, some red/green pieces of plastic, and some staples. It looked like this:

When I looked at it, I was having trouble seeing the stoplight without any black squares. I was seeing this a lot:

I was using both eyes (and overconverging, I think) but I was having trouble bringing those images together and making them overlap. When I try to make things overlap in my central vision, suppression kicks in and one eye takes over. Arggg, central suppression zone. I like to give a voice to my brain, so this is what I felt like it was saying:

"Okay, I'll use both eyes, but only to see things in the periphery. If you want to fixate on something centrally, though, I'm only going to let you use one eye."

Anyway, enough about stoplights. I also did some fun stuff with arrows on a piece of paper. It's very similar to using a Brock string, and I've seen it called "Tondel arrows" on other vision therapy websites. 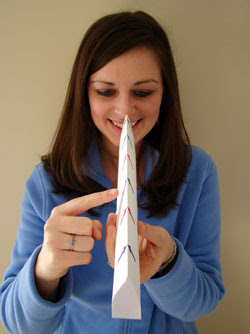 You have to make the little pairs of arrows touch each other. It's a fun time.