In the past few days, I read some more books on strabismus and learned a lot more about ARC. I've also received some feedback on my explanations and diagrams. As a teacher, I'm not satisfied until I've explained something as clearly and accurately as I possibly can. And so, I would like present a new and improved post on ARC. Again, I'm not an optometrist, so I might not have everything right. But I think it's pretty close this time!

Correspondence - Normal and Anomalous
Like last time, let's start off with a look at normal correspondence (NRC).

NRC exists when the brain believes that both eyes point straight ahead, in the same direction, at the same place. The two foveas are "hooked-up." 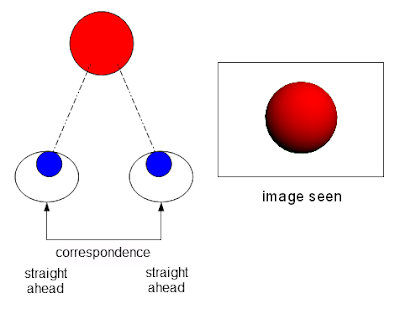 Like I said earlier, this correspondence works great when both eyes are actually pointing at the same thing. But if one eye is deviated, visual confusion and double vision result. Why? Because the brain still has that deeply ingrained belief that the two foveas correspond, that they look to the same place. (I'm using exotropia as an example, but the same would apply to esotropia.) 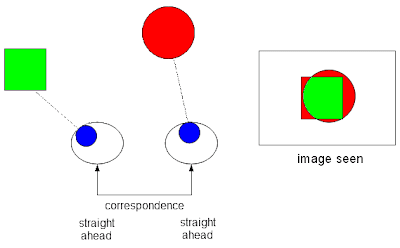 In most cases, the brain suppresses one eye to remedy this problem. The fovea-to-fovea correspondence remains intact. 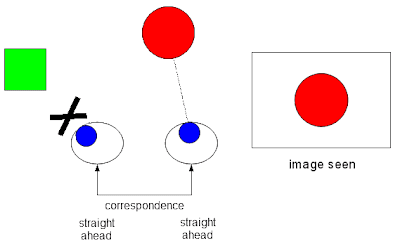 Here's where it gets complicated. Instead of (or in addition to) suppression, the brain can alter the correspondence. Let's say that your left eye deviates 45 degrees outward. Your brain operates under the newer, more realistic assumption that your right fovea points straight ahead, and your left fovea points 45 degrees to the left. That is an abnormal or anomalous correspondence.

Again, I'm not sure if an esotrope would see a panoramic view. I want to say probably not, but you never know. The brain is capable of many strange adaptations.

So that's the first problem of ARC. The foveas are not hooked up, and true fusion is not possible. The fovea of one eye doesn't overlap with the fovea of the other eye. It's the like story of the sun and the moon, of Apollo chasing Artemis. The sun approaches the moon, and the moon moves farther away. They're always separated by that 45 degrees of abnormal correspondence.

The second problem with ARC is that sometimes fusion and stereopsis DO happen, but in an abnormal and degraded way. This usually happens with a smaller angle of strabismus.

Clear, beautiful stereopsis happens with a fovea-to-fovea correspondence, because the foveas are the areas with the sharpest, clearest vision. But sometimes, someone with ARC will designate a new part of their retina to be a *new* fovea. A faux-fovea, you could say. They will then fuse the true fovea of one eye with the faux-fovea of the other eye. This can happen with in both esotropes and exotropes, and I have illustrated it in an esotrope below. 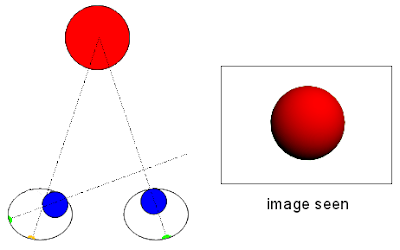 If this were someone with normal correspondence, they would have reacted with double vision, visual confusion, or suppression. But this person is able to use both eyes together via a faux-fovea.

So what's the problem? Aren't they still getting some fusion and stereopsis? Yes, they are, and that's exactly what some optometrists and ophthalmologists say. Leave those poor ARC patients with fusion alone! Their angle of strabismus is usually so small as to not be noticeable, and they have some degree of fusion. The problem is that the fusion gained through a faux-fovea is of lower quality, and true binocularity is hard to achieve because the eyes have developed a very hard to break habit. It's also hard for the patient in vision therapy to know if they are successfully fusing with both foveas, or backsliding into ARC.

To sum up, these are the two problems of ARC. Number 1, the foveas are not "hooked-up", and chase each other like the sun and the moon, never able to overlap. Number 2, sometimes a faux-fovea develops in the turned eye, leading to some sort of low quality stereopsis, and that habit is hard to break.

How is ARC diagnosed?
I've read lots of ways to test for it, and I don't pretend to understand all of them. For instance, some involve using "troposcope or major amblyoscope", and I have no idea what those are. However, in general, these are the things that point toward ARC:

-Evidence of "pasting" the images from each eye into a panorama, such as wearing red/green glasses and seeing a half red / half green room. Or as I like to think of it, the sun chasing the moon.

-Evidence of fusion in someone who is clearly strabismic and deviating. If someone with crooked eyes sits down in an optometrists chair and shows evidence of fusion while the eyes are still crooked, the optometrist considers ARC. Why? Because they must be using a faux-fovea. When the angle of strabismus is not very noticeable, the optometrist can do a cover/uncover test while the patient is fusing, which would show if they are fusing while being out of alignment.

-An ARC result on the Bielschowski Afterimage Test. This was the camera flash test that I mentioned in the previous post. You flash the fovea of each eye, one eye horizontally and one eye vertically. If they afterimages line up, it shows a fovea-to-fovea correspondence. If they don't, then this points toward ARC.

Should ARC be treated?

There are many differing opinions on if ARC should be treated at all. Here's what I have found:

-Don't try to fix it. It's dangerous to try and can cause permanent double vision. I've only read this in relation to ophthalmology, though. I've also read the same thing about treating suppression. Apparently everything is dangerous except cutting into your eye with a knife.

-Don't try to fix it, because it's too deeply ingrained and can't be fixed.

-Try to fix it, but if the patient looks good cosmetically and is a good faux-fuser, then maybe it's not worth the trouble.

-Try to fix it, but be aware that it can take a long time and is not always successful.

What is the treatment for ARC?

There are also many differing opinions on how to treat ARC. These are the methods I have come across:

-Start vision therapy with a STRONG emphasis on monocular training. Both eyes are trained separately, and the amblyopic / strabismic eye is exercised until it is equal in skill as the strong / fixating eye. This includes tracking, pursuits, and saccades. The exercises also include doing things like threading needles or stabbing Cheerios with a pencil, until YOU are able to do it equally well using either eye. This is supposed to orient each eye to the reality of the world, to make the eyes equal to each other (or close), and to show that both eyes correspond to the same reality. Visually directed movement activities can show the brain how the visual system lines up with reality.

-Bi-ocular tasks, such as anaglyphic (red/green) activities, that force fusion of the entire visual field. Touching and putting your hands on whatever you're looking at helps, too, and "proves" to your brain that each eye really does correspond in the same direction and to the same space.

-Dr Greenwald has a method of using prisms to cause diplopia in ARC. I gathered that the reason is to show the brain that the ARC adaptation isn't going to work anymore, and that a new correspondence must be developed (NRC).

With my current understand of ARC, this is what I can say about my situation:

-I have a tendency to "paste" and have a panoramic view of the world, but with some activities I can bring things together.

-Sometimes I have diplopia "against the rule", and sometimes I don't.

-I really don't think that I have a faux-fovea or any faux-fusion. I have to grit my teeth and straighten my eyes to do anagylphic / flat fusion activities, and I'm certainly not able to fuse while maintaining a deviated eye.

-When I do the afterimage test, I get an ARC response that I can bring into an NRC response by blinking and looking at a bright light.

So, what is going on with me? Why am I ARC sometimes, yet NRC at other times? Is it possible to be both? Apparently, it is possible. From Strabismus and Amblyopia, by Donald J. Getz, O.D. (it's a wonderful book, by the way!):

Reading that certainly made me feel better. I just knew that there had to be a "both" option when it came to this correspondence stuff. I'm going to continue to work hard on my monocular and bi-ocular skills, until something magical happens, like recently happened with our friend Strabby.

I also hope that this post will be helpful for any other vision therapy patients who have read about ARC, and lay awake at night worrying about their correspondence status. Fear not!
Posted by Josh at 10:53 AM