This week, we started something called "mirror overlap." This simple activity involves holding a mirror over one eye, and fusing the images from both eyes together into one image.

At first, I thought this sounded like a boring activity. Where's the fancy equipment? Where are the red/green glasses? I have mirrors at home. Mirrors are lame.

But then I tried it, and wow, it's pretty cool! It provides you with immediate feedback in regard to fusion. If you are fusing, you know it for sure. And somehow the mirror seems to activate the fusion-y part of my brain. So yeah, mirrors are not lame, and this is one of my favorite activities.

Here's how the exercise works:

The illustration on the left is method given in the OEP instruction sheet for mirror overlap. Place an object to your side. Angle a mirror 45 degrees over your eye, so that the object appears in the mirror. Stare straight ahead. Do something magical with your brain, fuse the images, and make the object appear as if it is located on the wall in front of you. Move the mirror around to make the object move around on the wall in front of you.

The illustration on the right is the way that my vision therapist taught me, and the method which I prefer. Place the object in front of you. Put the mirror over one eye. Move the mirror around and make the object travel around the room.

When I got home, I got the idea, "What if I could make the object move through a maze on the wall?" Then it would be a fun game and give my brain a task to accomplish. I feel like tasks give the brain an incentive to rewire itself. I'm an ESL teacher, and in my field, tasked based learning is generally preferred over learning language structures in isolation. Hopefully my eyes/brain work the same way! 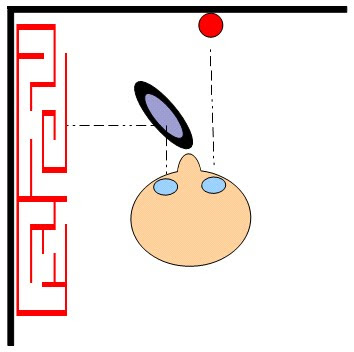 So I went out and bought some red paper plates from the dollar store, cut them up, and made a maze on my wall. 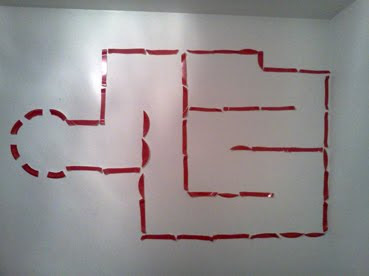 I also made some circular targets for me to practice fusing with. These are good for when there isn't room to make a giant maze. Just try to get the object you are looking at to appear inside of the circle. 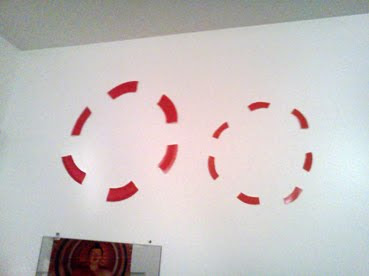 'Why paper plates?' you might be asking yourself. And, really, I don't have a good answer for you. I just wanted something bright red, which feels like a hard color to suppress or ignore. I don't know about you, but when my brain sees something red, it says, "Hey, that's important, I better pay attention to that, it could be blood."

I just got an even better idea for making wall mazes, though: Red party streamers. You know, the crepe paper kind... More later...
Posted by Josh at 7:37 PM