This week at vision therapy, I tried to see the 3D vectogram again, but still nothing popped out. C'mon brain!

I am doing quite well with the red/green playing cards, though. I used to only be able to see two at a time, and it involved lots of tapping and banging and finger pointing to make them both "turn on": 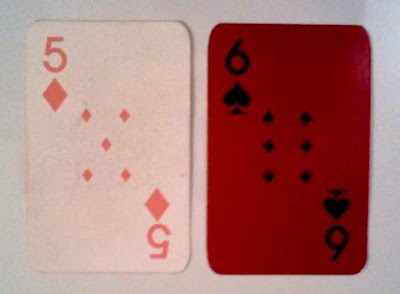 But now I am able to lay this many cards down and make them all visible, with no more tapping: 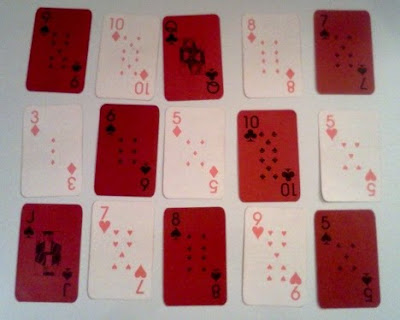 Hurray! That's basically, like, an infinity number of cards.

(For a humorous post by another strabismic on tapping and pointing to get things to "turn on", please read Magic Wand Finger)

Also this week, I continued mirror overlap with a new and improved wall maze: 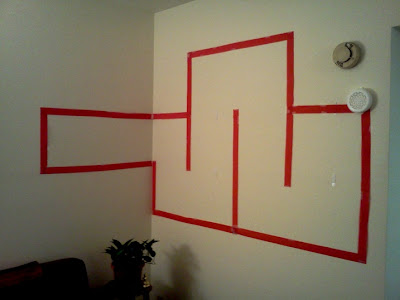 It's made out of crepe paper streamers, the kind you use for birthday parties. It works pretty well: it costs about a dollar for a giant roll, it's easy to make straight lines, and it's easy to put on the wall. Just use some tape, which also happens to be available in the birthday aisle.

There was one unforeseen problem, though. Because of it's porous nature, crepe paper seems to expand in humidity. It grows and gets longer! I noticed it getting a little droopy after I would do "steamy" things, like boil pasta or take a shower, but it would return to it's original shape after the air dried out. Recently, though, it reached it's maximum silliness when I had the flu. I ran the shower on hot with the door open to get some moist air into the apartment and into my lungs, and look what happened: 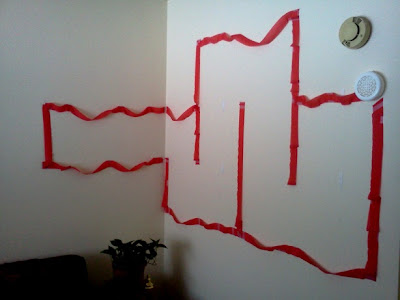 It's trying to escape the wall!

When you successfully do this exercise, it's pretty weird because you are looking into your own eyes. Eye contact like that is something that has been previously off limits to me as a strabismic. I even started imagining making my significant other wear polarized glasses (if I had one) and saying something like, "Honey, can you put these glasses on? I want to see what it's like to look into both of your eyes."

Finally, I also continued trying to see a steady X with the Brock string. It's getting easier!
Posted by Josh at 11:10 AM