I saw a little depth at my last vision therapy appointment. For the first time! Just a little! But still... it happened! Here's the story...

In Effective Strabismus Therapy, Dr. Israel Greenwald talks a lot about working with strabismus patients to achieve red/green luster while looking at a white wall. The patient wears red/green glasses, stands up close and stares at a big empty while wall, and tries to make the colors intermix and become inseparable. To help achieve this, he recommends that the patient wear high plus lenses (+15 to +20). These high plus lenses are basically superpowered magnifying glasses that make everything blurry. This removes all figure/ground distinctions and allows for easier fusion.

I asked my vision therapist if we could get some high plus lenses and she said 'Sure!' She called in an order to the lab, and I thought everything would be fine. It turns out, though, that it's very hard to find a place that even makes plus lenses that strong. The strongest that I have seen available for order on the internet are +12. (+12 is actually very strong though and would probably work, but that's not part of the story.)

So last Friday, I brought up the topic of plus lenses again and my vision therapist had an idea. There were lots of contacts in the office, so why not try high plus contacts? That way, there wouldn't even be a chance to "peek around" the glasses and ruin the blurring between figure and ground. They weren't any +20, but there were some +6 available. (or maybe they were +4, I can't remember).

So I said yes, even though I was kind of terrified. (You remember what happened last time someone got all up in my eyes.) And it turns out, contacts are really hard to get in! I did the usual - hold your eyelids down like they are trying to escape - type of thing, but then I would involuntarily try to shut my eye so hard that my eyelids would turn inside out and block the contact anyway. It was both funny and gross.

20 minutes later, when they were finally in, I got to experience the world as myope (near sighted person). I actually found it quite nice. My eyes couldn't focus on anything and thus didn't try - it felt rather relaxing. It also blurred out everything past my nose, leaving me encapsulated in a blurry womb. I've always been an anxious and shy person, wondering what people are thinking about me (are they looking at my crooked eye??), and for once, I couldn't see anybody's faces. I just had to assume that everyone was smiling at me. I wouldn't want to live with uncorrected blurry vision, of course, but it was nice to take a vacation in blurry land for a while.

So we tried some red/green luster with the white wall, and the extra plus seemed to help (more plus would have been better, though). While, the contacts were in, we also tried some other things. I had some vague memories of reading that dim light can help fusion and help break suppression, and something about contrast levels.... and something about ARC and peripheral fusion... and something about something else... So we decided to try out some polarized vectograms while I was wearing the plus contacts, just for fun, and.... something happened!

First, I was looking at this "figure 8" vectogram:

I was looking at this one the previous week, and while rocking side to side, I noticed that one of the little triangles was moving with me. It only did it for a second, and I couldn't really get it to happen again, but I knew that this vectogram was doing something funny to my brain. So, while wearing the blurry contacts, I decided to start with this one.

I put the polarized glasses on and started to rock side to side like last time. And suddenly little triangles started popping off the screen! They didn't stay popped out for very long, but it happened more than a few times, especially (for some reason) on the triangles on the left hand side of the picture.

It reminded me of those pop-up story books - the kind where you pull a tab and little paper figures extend off the page. It was as if someone was pulling a tab behind the vectogram and making the triangles pop out. At one point, I even saw a wave of depth undulate across the vectogram and then disappear. It was pretty neat.

Excited, I tried another vectogram - the one my vision therapist calls "creepy clown." 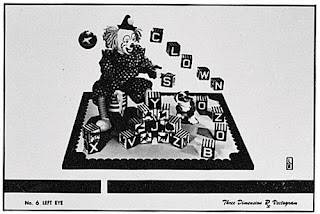 Again, something happened! Nothing really popped off of the screen, like those little triangles did in the figure 8 vectogram.. It was more like... the screen fell away and I was looking through a portal into another dimension... A dimension of scary living devil clowns!

The area with the most depth was that area between creepy clown's legs, where you can see his two legs, his hand, and the stool. It's was very depthy in there. And yes, I do appreciate how creepy it is to have one of my first experiences with depth involve looking between a clown's legs. Some optometrist out there sure has a sick sense of humor.

Also, every time the screen fell away and got depthy, I got the strange sensation that someone was punching me in the stomach. That was pretty neat, too.

So that's the story. It wasn't in "real life", and it was blurry and unstable. But it HAPPENED. Up until this point, I have been secretly fearing that maybe I was born without those special binocular neurons. Maybe I became strabismic because my brain was missing some pieces... Now I know that's not the case. I just need to keep practicing.
Posted by Josh at 12:55 PM